The Chaos Project: A Year of Autumns

An outgrowth of the “10 Minutes Ambient” series, "A Year of Autumns" aims to engage two linked notions: landscape as formal structure and the representation of the natural world.

While doing some tests for the "10 Minutes Ambient” series I was struck by the superficial resemblance of some of the results to the uses of color in the landscapes of certain impressionists, particularly Monet, Sisley and Pissarro, and also, it should be said, to certain works of Paul Klee: those consisting of an irregular grid of irregular somberly colored rectangles. These results are incorporated into Month 7 of the project.

I have always tended to avoid the use of arbitrary color, finding it too evidently subjective and emotionally charged, undercutting the essential neutrality I sought to achieve. So when this opportunity presented itself to explore color, I was not prepared to simply select colors on the basis of taste. Instead, I decided to interrogate the form by taking photographs, composed in conscious reference to the style and content of impressionist landscapes, and to use those images to define the color values of the ambient radiation maps: the natural world expressed directly, but otherwise than through optical mimesis.

Each of the 12 images that make up “A Year of Autumns” is a map of one calendar month’s ambient radiation as sampled from 9am to 9:10am each day, from May 1, 2016 - April 30, 2017 (20,000 - 24,000 events per month). The data derived from these events is used to create a virtual topology in a 3D modeling program. Due to the inherent randomness of the events, this topology is itself a random landscape.

The twelve landscape photographs taken specifically for this project were made during the Autumn of 2017, principally in upstate New York and Brittany France. Twenty color values were sampled from each of these otherwise-unseen photographs and then assigned to a month’s events on the basis of an algorithm employing that month’s data set. The results are then digitally lit and rendered. The final works are inkjet prints on paper; the print sizes are variable.

This random mapping creates portraits of the natural world. Although glimpsed only indirectly, they are as linked to the physical world as their underlying photographs.

Confining this series to autumnal scenes derives from a desire to explore the viewing dynamics of the series form, expressed both sequentially on separate sheets and simultaneously when viewed in matrix form. Earlier versions, not released for distribution, employed landscape photographs made throughout the year, but I was unsatisfied with the series coherence. In my view, what they gained in variety they lost in resonance between the individual images. For the experience of a series to be fruitful, the eye requires a balance of similarity and difference, of ambiguity and concreteness, so as to be led to seek out correspondences that are not too easily resolved. I hope this series possesses these characteristics. 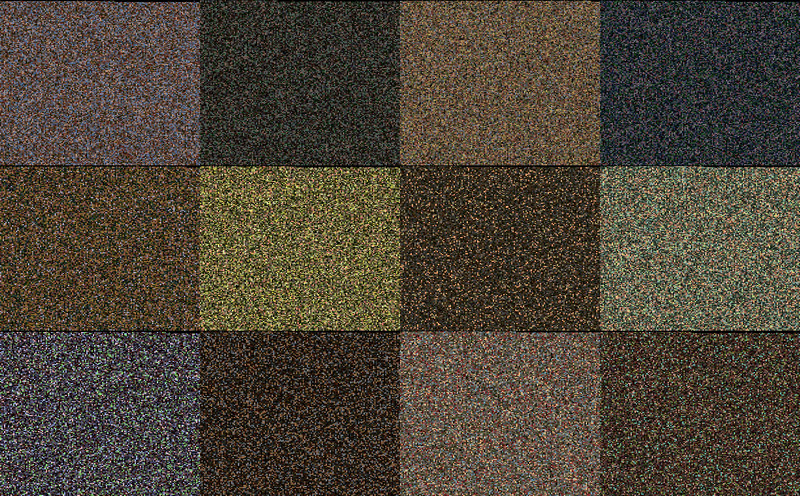